I have recently joined a LoL team, I'm their top-laner. We just played our first 5 placement matches, all victories. Starting league: Gold 2. I'm really optimistic. Our goal is to reach high-platinum S4 . 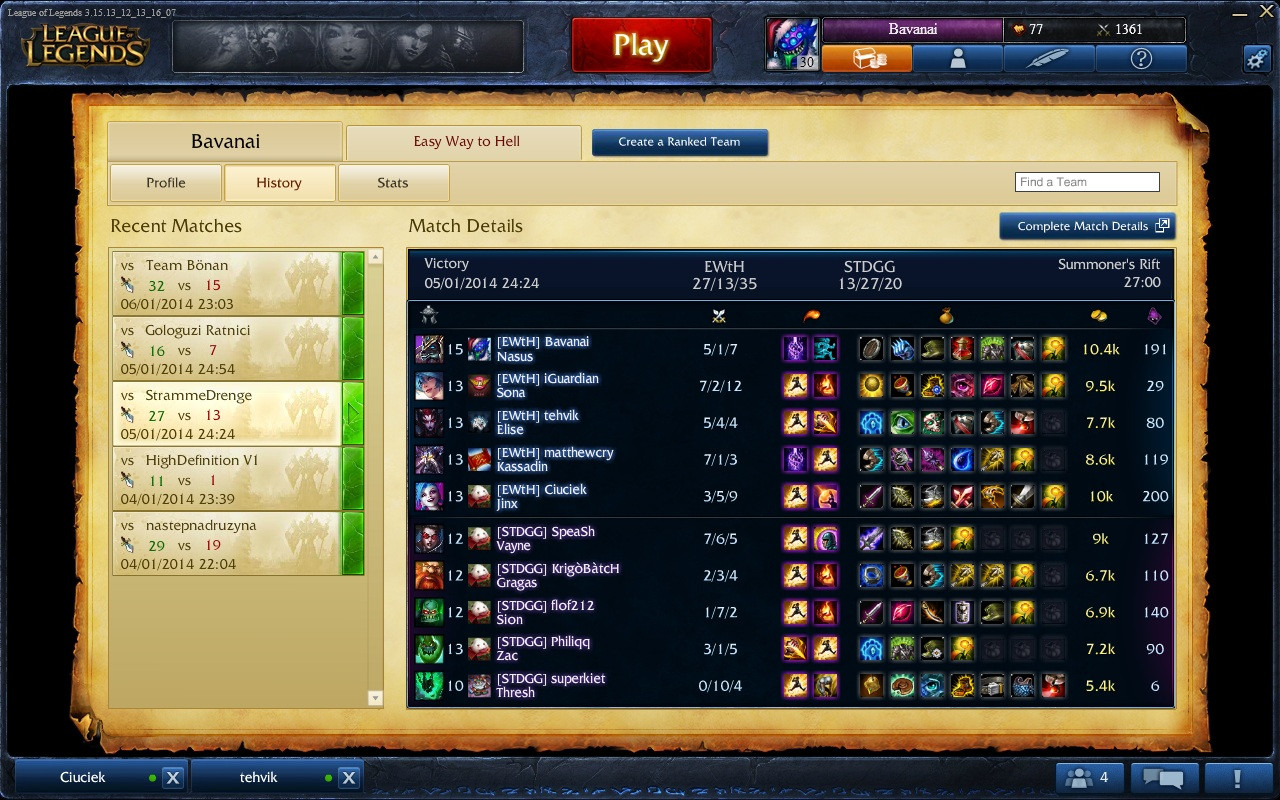 2nd in command already. I'm plotting on how to overthrow the team captain.
t('v't)

Maybe it's just me but I feel like Kassadin isn't what he used to be. Nasus still wrecks

Yes, Kassadin is even better now.
...

The only thing I still think he's good at is his ability to roam ,day by day more and more people switch the roles of AP mid and go for a assassin like yasuo/zed/khazix/panth :C
Last edited: Jan 10, 2014
H

I'd rather banned Gragas nowadays than Kass.

Hiroshima said:
I'd rather banned Gragas nowadays than Kass.
Click to expand...

They are both OP right now. Kassadin is really annoying in the sense that you counter him in lane, he's got 15 cs, gets level 6, goes bot, gets double kill, gg.
t('v't)

all my friends moved to NE cause of the free transfer. They were starving for a "new start", although I dont see the point, they're just casual players, most of them bronzies that barely care. Still, I shall move tonight as well. Haven't picked a name yet, tho i'll shout it out when I do. Maybe some of you wanna play some games together, just for the sake of it.

getting some sh1tass error when trying to move to ne. sent a ticket. meanwhile...lost 6 out of 10 placement matches. Got Bronze II. Awwwwwwwwwwwwwww YEAH!
H

Cant transfer to NE due to this weird 9300 error. Send a ticket, got a couple of answers from these 2 guys from the staff, sent them some screens and stuff...still waiting.
Meanwhile, I've got my promo for BRONZE FUCKING ONE.

2 more to go,hopefully I win these 2 as well,I'll get a ladder based on 9 games because of that loss prevented. The guy I'm playing with had 6 wins 4 defeats(1loss prevented) and landed in gold 1. welp. looks like I'm at least gold 1. I should have won those 2 matches as well,but some people are just retarded,we were in a pefect spot both games,but people think that if they have 6kills and 1 death they can 4v1 and keep throwing 5v2 5v3 then later on you can't do shit anymore..Both were lost because of a fiddlestick jungling.
H

Barely today had I found out how the Loss Prevented thing works. Had like 3 of those during the 10 games. That'd mean 4 wins, 3 loses and 3 prevented craps. And got to bronze II. iSad.

Why? In my 3rd placement match, I was playing top Nasus. I got 2 early kills on Nasus, team score was 2-0, so that game was like won. The 2 bot guys kept flaming and being negative, blaming, pressuring jungler, spamming ping - you know, extremely toxic behaviour for little to no reason at all... I mean, we were OK, you know? We had advantage, we had the game in our hands, but they were outplayed a bit on bot. They DESTROYED and LOST the match through flame and toxic behaviour.

I swore I will never throw myself into such toxicity ever again. It's not worth being angry and ruining my mood 15 games for that occasional game where nobody flames.
t('v't)
Show hidden low quality content
You must log in or register to reply here.
Share:
Vkontakte Mail.ru Blogger Linkedin Liveinternet Livejournal Facebook Twitter Reddit Tumblr Telegram Viber Skype Link