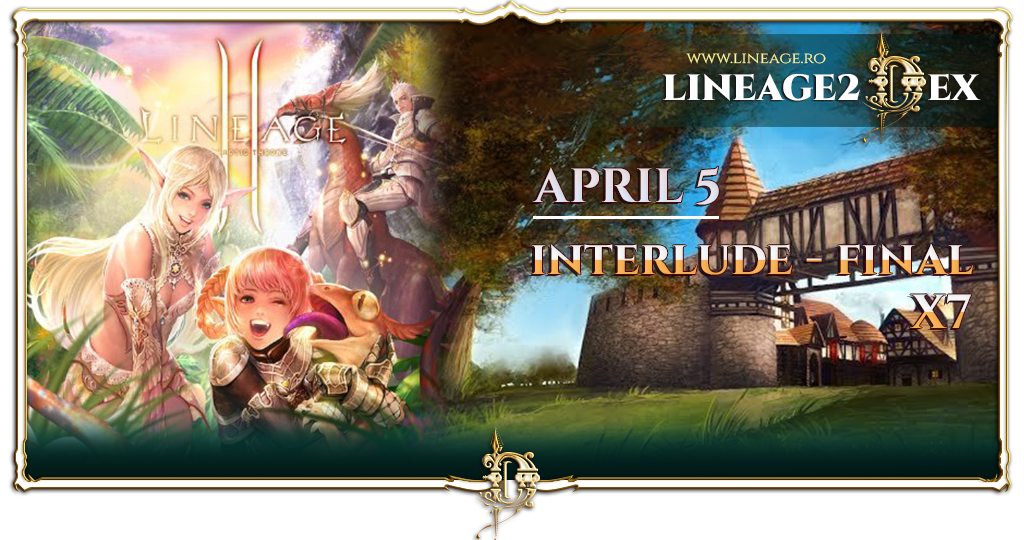 Dear friends!
We have decided to create something special for you, the new project we are preparing is Interlude Final x7 and we are doing it with our well known partner which is the one we have Gracia Final server.

Interlude is considered to be one of the most popular and successful chronicle of Lineage 2. But as we know, the game client is not perfect and, to put it mildly, outdated, because it was developed back in 2007.
Some of the mechanics and balance of the game need much more attention. The new Interlude project is created by transferring it to a modern game client and thoroughly work on the balance and game-play, collecting the best and incorporating it all into a new project Interlude Final

All info about Interlude Final we will post later in this section of forum.

Here we have selected some useful information from the developers:


The old client was developed for relevant at a time processors (and hardware in general), which had fewer cores. As many of you know, today's processors increase the number of cores (streams), but often reduce their clock speed compared to older processors that were relevant at the time of release of most versions of the clients/games.
So, roughly speaking, Core 2 Duo @ 3.16 GHz (2 cores) of 2006 will be better than Intel Core i5-8400 @ 2.8GHz (6 cores) of 2017 for older game clients.

This is not the only reason for the low performance of old clients on modern computers, because a whole set of factors is responsible for this: motherboard, processor, RAM, disk (write/read speed).
Since the Grand Crusade client (alias a Classic 2.0 client) was developed with an eye to more modern technologies using the successful and unsuccessful experience of previous clients, it’s natural that its functionality and performance is much higher. And we all congratulate us on this
We have made a new client for Interlude Final servers based on Grand Crusade \ Classic 2.0.
This client is not only a more spectacular picture, but also more technical capabilities for us (developers):
We also use modern technology for processing client-server data packets, which allows us to reduce the response time from the server. We successfully tested it on our autumn server and there was impressive result.
Satisfied players from China can confirm it

Personal data base:
We want to please all the players with a new interactive system of hints and notifications.
Most likely, the BBS (Community board) will be taken as a basis, with the author's interface for performing the following tasks:
We want to emphasize that for this launch we aim to achieve 2 goals:

Interlude Final x7 can be described in three main points:
In this topic, we announce the server concept and describe the components of Interlude Final which you should pay attention to, in order to fully touch this game world.

Adventurers Guide
NPC Family Club Manager (improved analogue of Newbie Helper) can be found Near Gatekeeper at every town, as well as at places where a lot of players are getting together. These are NPCs from which you can take Support Magic, Daily tasks and rewards for them, as well in the future they will be responsible for holding weekly Events and issuing Prizes.

Preliminary version.
Before and during the OBT the assortment of the shop could be changed. Stay tuned!

Family Coin - donation currency, which you can purchase at your Control Panel: